What's on your mind?

Having a look in the forums here, I've noticed some people posting the same questions/issues I have regarding spawning in the very bottom left of the map on Chernarus Redux (running the ravage base mod as well), but I'm also curious as to if there is a way to have some sort of progress save (upon logging off the server) so that when someone logs back in to continue playing, they don't have to start all over again with base weapons and random spawn as though they were killed.. with that said.. I am very new to running an arma server (took me several hours of trial and error, and a variety of mods before I was able to find a combo that worked)... any useful information, or possibly even some direct assistance would be greatly appreciated. Just an FYI, this is a private server for myself and my friends, I do not intend on attempting to "cash in" on the server or use it for any kind of monetary gain.. I say this because one on my friends, had attempted to reach out to some people regarding my earlier issues with the setup of the server, and he was bashed for asking being accused of trying to make money off the game and server.. what has happened to the community that I used to remember when it came to gaming and small group/clans helping each other out with things like this? the scene has changed a lot in the last 20 years.

Please be kind with your responses. I am genuinely hoping for some friendly assistance, and I apologize if I posted this in the wrong section.

How do I populate a slef placed storage with the items added by Ravage? I can't seem to find them in the list of the Eden Editor
(edited by A Fandom user)

Thanks Halek. I have almost 700 hours in Arma 3 and at least 2/3 of that is from playing  Ravage. Thank you so much!!

It seems they have maybe different classnames for houses in Chernarus Redux than in original Cherno map had ? So.... these houses dont get any loot and shoul be listed in house names ?

i set up a safe zone that was larger then the Ai spawn distances and they still spawned within the safe zone. i have no idea if this is a problem with the mod or my own incompitance, i did have the safe zone set to be owned by blufor.

So I have downloaded ravage and activated it alongside with CBA. I got the two mods from armaholic here

I decide to test it out through the editor just to see what im up against. As im loading into the map i see an error at the loading screen. Something to do with autowalk missing or like that. I thought it was nothing considereing it just said autowalk and that didnt really interest me in particular. So next i placed down the following modules

Atmosphere and some other one i forgot.

No error codes showed up as i was placing down these modules. I placed down my guy (Combat Life Saver) and started up the scenario. As soon as the loading screen showed up it came up witht the same autowalk error code. My game started up and a long list of error codes came up for  ten seconds about. i decided to run around and see what was working. The atmosphere module seemed to be working perfectly but everything else was a bugger. No AI. No Zombies. No Loot. No Vehicles. No Survival system. i could tell that the game was trying to place down ai because once i went a certain distance i would get an error code about something with spawning.I was not able to get screenshots. Any help or advice for this?

(edited by Nuklear Kaos)
is it possible to change the zombies faction from their special ciz faction to another vanilla faction? if so how would i go about doing so.
(edited by A Fandom user)

I have added in the modules and im ready to play, i start up the game and the first thing i see are errors on the top of my screen, I decide to ignore these thinking it was some sort of other mod or something. But i run around for 10 minutes and notice nothing is spawing at all, no ai, no vehicles, no loot. It says there is a generic code error for alot of things and i dont know hwy, some help please?

Hi there, I have been playing Ravage SPlayer for ages which has been fantastic fun [An amazing mod]. Last week myself and a friend have been trying Mplayer together. After about half an hour (or lots of respawns) we end up respawning(And each subsequent respawn) in the ocean at (0,0,0) in the SW corner. We are hosting the game from our own PC's. Initially the game runs fine, but then gradually deteriorates and ultimately freezes up. We have both hosted and the same thing happens on each server.

Today I'm just come back Arma 3, I'm update my Arma 3 and Ravage mod, CBA_3 all up to date and this error just show up. It's never happen from old version, can you guys help me please ? I'm even try to run the mission with RHS mods and all CUP mods too but this error still show up. The mission Ravage I download is The Escape, the other missions still work fine but some mission still have this error too 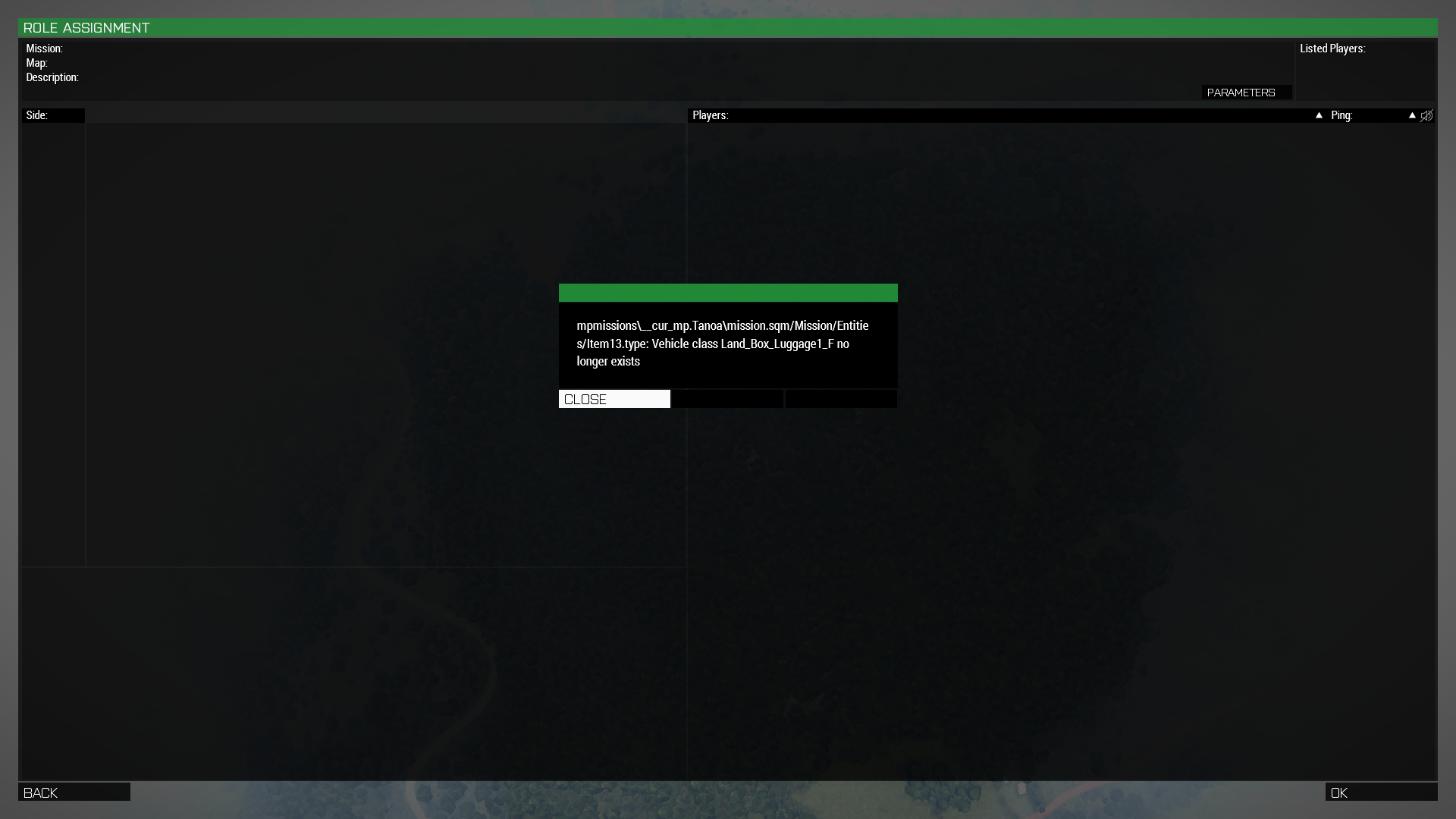 Hi. I've been having a hard time figuring out how the loot system works. I've added a couple rhs pistols to civilian loot table and set the probability of finding stuff 50 for every item in the civilian table. Problem is I still seem to find only survival items, nothing else. Not a single weapon or any ammo. If I set weapons to 100 then I'll find only weapons, if I set magazines to 100 I find only ammo. But everything at 50 only gets me survival items. I don't know if this is connected to the problem or not, but sometimes when searching objects, the inventory pops up but it doesnt show any items. Other times it just says that "nothing but junk" etc and the inventory doesn't pop up.

Cant get the mod to work - added local mod and selected @Ravage from my download folder, but still wont work

I have added the Iron Front Lite mod to my mission, but now the traders are not buying weapons from the RHS pack. Any clue to why this could be?

So I placed down a Safe zone module but the AI that comes in the designated radius doesn't retreat or get deleted. I tested and the AI never spawns inside the Safe zone radius. Zombie blacklist works as far as I can tell.

So any idea how to delete the hostile AI that comes inside the safe zone? I dont want to delete BLUEFOR AI since I made a base with them guarding the safe zone.

The Loot system is working perfect for me, in SIngleplayer. For some reason, the loot system is not working in Multiplayer. Is that a normal issue?

Hello, I have another little issue.
I set the loot % in 50/60+, when I start fresh I find loot everywhere, but if I go to sleep, when I wake up there is 0 loot around, nothing at all.
I checked it by reverting to a save prior to sleeping and the same loot sources spawn loot of any kind. I tried it a few times.
I tried different maps and I even ran (not drove) accross maps to check it, nothing at all, I tried multiple military bases and areas with lots of loot spots.

I thought it resets the values to vanilla Ravage (8,1,15 etc)but as NOTHING appears I doubt it is that.

I googled but nothing matched my problem, do you have any slight idea on why is it happening please?

Thank you Kodabar fro the amazing tutorial you made a while ago, it's my first run at Arma 3 and modding ravage gave me the chance of learning my way: no zombies, no military simulation, just surviving.. It took a while to get things right but now I think I got it as I wanted, or close.. One thing that really bugs me is the NPCs "pay x win" thingy;-) I don't own Apex for example and I am not gonna buy it unless on 80% sale as I am against paid DLCs. Even worse is when enemies have AKs and RPGs and I only have a submachine gun (5.56) AND these horrible in game (IN GAME!!!) prompts pop up telling you to buy the DLC. Problem is that most of the loot (80%) has ammo or weapons from said DLC, it makes it extremely annoying and unbalanced. How can I get everybody (me and NPCs as I play SP) to play on the same level by removing the DLC weapons altogether?

I have had to set the spawn % in the 50 and 60 to see something happening...and I thought you exagerated in your video, yeah right, it's barely enough:-)) I added to my guy an assault rifle but can't find ammo anywhere, I spawned in vehicles loaded with stuff but it's not the same, feels cheaty. In my research I found this in the patch notes:

But right after he says something about weapons which I haven't understood:

Does it mean that if I get a supported mod (one of those named in the editor),the game will use the items from said mod instead of Apex and co?

I am fairly ignorant in IT, so please excuse me if I have not included infos that are needed, tell me if you need more infos from my side. I searched before posting, but the subject is vague and the amount of data immense:-) Thanks in advance.